Our time in the West brought us closer to the finish line. In fact, our little team still had one last step in our return trip toward Québec: Ottawa! 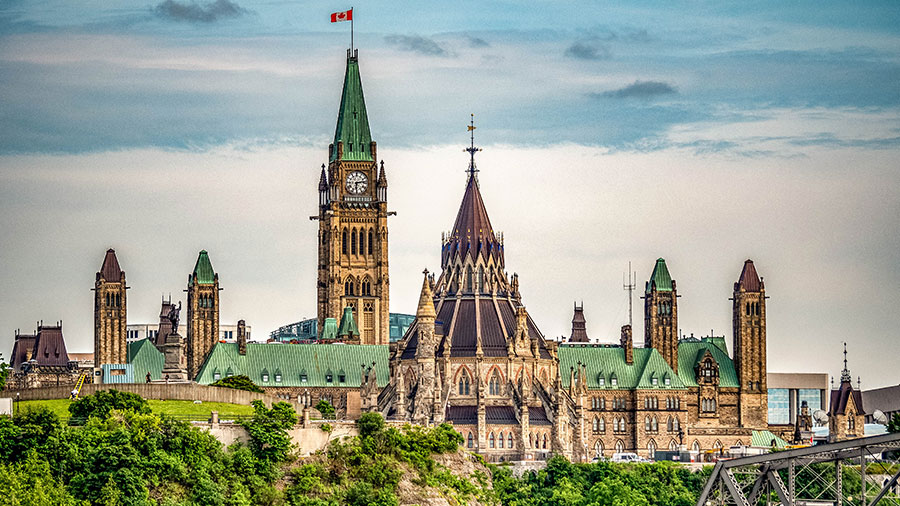 Our time in the West brought us closer to the finish line. In fact, our little team still had one last step in our return trip toward Québec: Ottawa! As Mario is from this area and that we were on a Canadian road trip, we thought that there would be no better way to end this incredible adventure in grand style than with some Canada Day fireworks!

To get there, we had to pick up the pace in order to drive the 3,400 kilometres that separates our stopover city, Canmore, and the capital city, Ottawa. All in less than four days! The road unfurled before us, and we were able to use the travel time to work uninterrupted… except for the occasional bumps and potholes!

Once we arrived in Ontario, we decided to change up the route, and we opted to take highway 11 instead of highway 17. We followed along the shores of Lake Helen during the sunset. The last pink rays caressed the silhouetted peaks of the pines bordering the lake. It was all truly beautiful. We passed a few more vehicles, then as night fell, only trucks emerged in the night’s calm. It felt like we were in the middle of nowhere, surrounded by darkness. What an incredible impression! On the side of the road, we passed a bear, and further on, a wolf! It was a surreal and magical experience.

Just as we were about to leave Geraldton, a sign indicated that it was more than 200 kilometres to the next service station. Unfortunately for us, we only had enough fuel in the tank left for 130 kilometres… There is no night service here, therefore we spent the night in front of the gas station, which would open early the next morning. An excellent opportunity for Mario and Martin to take a few magnificent pictures of the Milky Way!

Road, road, and more road. And finally, Ottawa! We arrived in the Canadian capital during the beginning of the afternoon, and the energy surrounding the celebration of Canada Day was palpable! The red and white was on full display. After lunch at The Works, where I got to enjoy my portobello burger, Mario got his deep-fried bacon (you read that right: breaded, fried bacon!), and the boys got their gigantic burgers, we were able to meet up with Cédric Meloche, Business Development Director for Postech Ottawa, on the site of one of his premiere projects!

In front of a house suspended 12 feet into the air, we discussed the coordination that this type of project needed. “It took us two and a half days, and the City came out. It passed the inspection, and everything went beautifully!” From all the worksites we’ve visited, punctuality and the rapidity of installation kept showing up as positive qualities that would entice a general contractor to do business with Postech, and we could see why: a worksite, before all else, must run a tight schedule! “We had to disconnect the water, and the electricity, then dig… After that, we were in. But then before repositioning the house, we had to finish pouring concrete around our piles, then reconnect everything, etc.”, Cédric explained, as we took our tour around this huge, two-story townhome.

“We try to approach engineers as often as possible, giving them presentations on our screw piles and the projects we could do using them”, he explained. “We’re at a stage where the product does not automatically come as a solution, but once we’ve worked with a firm, they continue to work with us!” In fact, Cédric and his team had won this contract by proposing a solution to the engineering firm in charge of putting this house back on its foundation.

Off, and filled with crowds for the festivities, we headed toward the marina to meet up with “Moe”. Moe is the nickname given to Maurice Taillefer, the Postech Ottawa dealer. Cédric is his right-hand man, and they rely on each other to get work done. “Moe is the kind of guy who always finds a way. I run the office and the business side of things, and I know that I can count on him at all times.” Maurice was all smiles, waiting for us on his 44-footer: a beautiful boat that would take us out on the Ottawa River to watch the fireworks. But first, we took a quick stop at a little restaurant that Moe frequents, where we anchored the boat. Everyone greeted us. “I hope that you’ve had a good journey. Now, let’s finish this adventure off with a beautiful evening!”

We dined. The boat was packed full. Finally, we savoured our free, clear view of the fireworks. They burst in the sky, lighting up the night, the Parliament, and our smiling faces. Then the grand finale: an explosion of colours, sounds, and shapes! During this grand spectacle, I had my dog Ila close against me; he doesn’t like fireworks, and was trembling, waiting for them to be over. The last lights faded from the sky, and we brought the boat back in. We turned off the cameras, packed our bags and said goodbye to Cédric and Moe. It’s our final time hitting the road, because tomorrow, we’re taking the RV back to Montreal.

Postech Piles is a Canadian company specializing in the manufacture, distribution and installation of galvanized steel screw piles for the residential and light commercial markets.